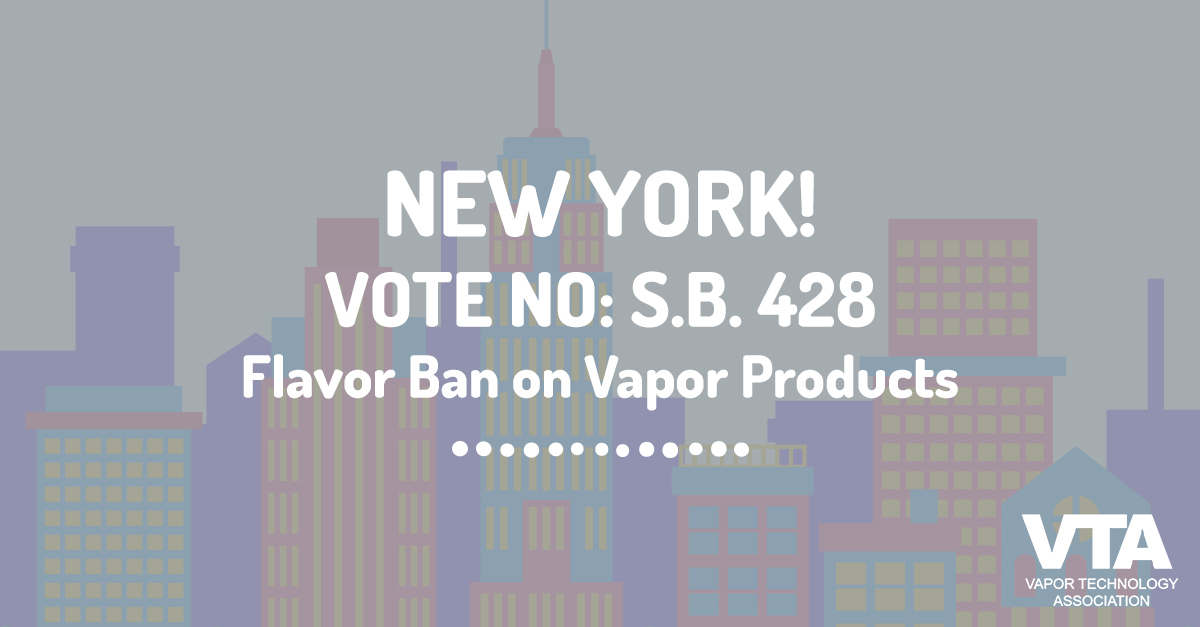 On behalf of the business owners, like myself, in New York and the consumers they serve who are attempting to quit combustible cigarettes, I am asking you to Vote NO on a flavor ban on vapor products.

Now, as your constituent, I need you to protect the customers I serve.  My customers have been smoking for years and have tried quitting multiple times. The first success most of them had was with flavored e-cigarettes and vapor products.  Flavored vapor is the only thing that has helped them REDUCE SMOKING or QUIT SMOKING cigarettes.

So, your proposed flavor ban on vapor products will directly jeopardize access to alternatives to combustible tobacco.  Moreover, it will harm all of the businesses that New York taxpayers have built and are still building by forcing their adult consumers who want to quit smoking to get their vapor products from sources other than local retailers.

To be clear, there are 38 million smokers in the U.S., and every year 480,000 die from smoking related diseases. In addition, recent studies have demonstrated that combustible smoking costs taxpayers $170 Billion in direct health care costs.

Further, in a January 2018 study published in Tobacco Control, Georgetown University public health experts found that switching from traditional cigarettes to e-cigarettes would annually prevent between 1.6 million and 6.6 million premature deaths in the United States – deaths that are caused by cigarette smoking.

In their Public Health Statement on Eliminating Combustible Tobacco Use in the United States, the American Cancer Society stated: “Some smokers, despite firm clinician advice, will not attempt to quit smoking cigarettes and will not use FDA approved cessation medications.  These individuals should be encouraged to switch to the least harmful form of tobacco product possible; switching to the exclusive use of e-cigarettes is preferable to continuing to smoke combustible products.”

Flavors are important to quit attempts. Many consumers rely on flavors other than tobacco, mint, and menthol to stay off of combustible cigarettes. An April 2018 national study completed by Julia Chen found that e-cigarette users who attempt to quit with one or more non-tobacco / non-menthol flavors were significantly more likely to have reduced or quit smoking over time than non-e-cigarette users, thus suggesting that the continued availability of such flavors is important to support smoking cessation efforts.

A flavor ban would stand in direct conflict with these findings by reducing access to vapor products for adult smokers who are desperately trying to quit.

Please Vote No on Senate Bill 428 a Flavor Ban on Vapor Products.